Ireland Yearly Meeting seeks to appoint 3 part-time Youth Co-ordinators (one for each Quarterly Meeting) who have the concern and ability to inspire and encourage spiritual development among Young Friends of all traditions within the Yearly Meeting.  They will enable communication between and support of local meetings and groups in their work with children and young people.  The Youth Co-ordinators will work with the Young Friends, their parents and volunteers to develop and deliver activities and events within Ireland Yearly Meeting.

We are delighted to bring you news of a recently published book written by Clodagh Grubb of Monkstown Meeting.

Clodagh, a history graduate from Trinity College Dublin who has curated the collection of samplers and other textiles in Friends House Historical Library in Dublin since 2011, has spent the past seven years researching and compiling her book, ‘Samplers, Sewing and Simplicity in Quaker Ireland’.

The book grew out of the author’s love for textiles and design, her interest in history and the discovery of the rich and varied collection of needlework and textiles in the Friends Historical Library. With over 150 illustrations, the book looks both at this work, produced for the most part in the eighteenth and nineteenth centuries, and at the social and historical context in which it was made.

The Quaker belief in the equality of all and the consequent importance given to the education of girls meant that Quaker women were often better equipped than most to deal with running a household and dealing with much of the business and accounts. They might have to do everything, from spinning to making clothing, bed linen and other soft furnishings.  At a period when employment for women could be difficult to obtain, their sewing skills were a considerable advantage.

The Quaker ethos of simplicity in everything from clothing to furnishings to social life coloured most activity. Where unnecessary ornamentation was frowned on, surviving dresses show a definite awareness of fashion in their cut.

Making a sampler was a form of recreation for girls, some as young as six years of age, which allowed them to use more creatively the skills that they had spent many hours practising in the schoolroom. A love of colour and a diversity of scripts and motifs, many drawn from a broader European tradition, and the way in which they are arranged gives many of the Irish Quaker samplers a character of their own.

Clodagh is from a Quaker family who came to Ireland in the late seventeenth century.

‘Samplers, Sewing and Simplicity in Quaker Ireland’ by Clodagh Grubb is  published by Friends’ Historical Committee and copies are available from Friends Historical Library, Stocking Lane,  Dublin 16  at a price including postage of €30 for paperback or casebound at €40.  Email Library@quakers.ie to purchase a copy or for further information.

Junior Yearly Meeting is open to Young Friends aged 14-18 years
or anyone who would have been 18 on Easter Sunday 2020.

The theme for JYM 2020-2021 is Simplicity. Over the course of the week we will discuss the value of simplicity in our lives and in the workings of the world. Through our sessions we’ll look at what happens when we slow down and allow ourselves to be bored – this often leads to creativity – and we’ll debate the importance of simplicity, and what it actually is.

In order to contemplate this year’s theme, we will host a panel discussion. Through workshops we’ll explore our interpretation of simplicity and our attitudes towards it. We’ll also discuss how each
one of us can bring more simplicity to our lives.

It was a wonderfully stimulating session considering how we can rebuild society post Covid19 with the three speakers providing plenty of food for thought.

She said imagining a future like this was the first step to it becoming a reality. “As our planet heals, so will we as we appreciate the inter-connectedness of all living things,” she said.

Romanian-born and US-raised Oana Sariana Marian, an artist and writer and Co-founder of the Active Hope Network who is pursuing a PhD in Theology at Trinity College Dublin, spoke about the need for climate grief and imagination as we work towards a sustainable future. She also encouraged each of us to self-audit how we spend our money and to educate ourselves about how our society is functioning within the wider global economy.

You can read Oana’s talk here.

Féidhlim Harty of Cork and Limerick Meetings and founder of FH Wetland Systems said there were five things we could do to help create a more sustainable future:
– spend our money consciously
– live more simply
– advocate for change
– build and strengthen connections
– remain optimistic and ‘hold the vision’

He encouraged us to nurture a clear vision of a beautiful earth and to anchor this in our minds through prayer and meditation.

You can read the full script of Féidhlim’s talk here.

The entire event was recorded and you can watch it on our You Tube channel.

Eco Quakers Ireland and the Ireland Yearly Meeting (IYM) Investment Committee has produced a booklet to promote an ethical investment policy for Quaker Meetings in Ireland and for IYM Funds.

The Quakers and Ethical Investment booklet, which arose out of a widespread concern among Friends in Ireland about the investment of funds under Friends’ care, is designed to give broad guidance on investment within the ethical framework which Friends have set.

In a letter accompanying the booklet, the Investment Committee and Eco Quakers Committee urges Friends responsible for the investments of Meetings and Funds to view afresh the strategy that is being pursued.

“Monies are only useful if they are used for a purpose which is well thought out,” the letter states. “If, as a result of a review exercise, you do plan to change some of your investments, do take into account that stock markets can be very volatile as we have seen in early 2020.

“We are investing for the long term and should not be over affected by short term movements. Advice is available, both from within the Society and from outside – do seek it and take it into consideration!”

The letter may be read in full here and the booklet at this link.

The booklet is initially being launched in digital form but some hard copies will be printed and made available at Yearly Meeting 2021.

Continuing and deepening difficulties in Lebanon make life for the staff, the pupils and the whole community of Brummana High School, a real and daily challenge.

The Quaker International Educational Trust’s (QuIET) responsibilities are twofold. Firstly to support the local Governors of the school; the Principal David Gray and his team; but most importantly the continuing education of the 1,250 children who study there. Secondly we are pledged to uphold the Quaker values upon which the school was founded nearly 150 years ago.

David’s letter inside sets out what the problems are and how the school is meeting the challenges. We, as QuIET trustees, invite Quakers everywhere to join us in supporting the school by donating to the 2020-21 Bursary Appeal.

In this time of Covid 19 crisis,  we are thinking of  the residents and  the wonderful staff working in Bloomfield Health Services.  Founded in 1812 by The Religious Society of Friends,  Bloomfield today consists of New Lodge Nursing Home with 36  beds and a Mental Health facility of 114 beds with a staff complement of over 200, from all around the world.

Bloomfield will need an  Emergency Fund to help them all through lockdown, isolation and infection.   Their immediate need is for iPads/tablets to help residents connect with and talk to their families remotely but  they will have to face and cope with other unexpected consequences for both residents and staff.   We ask Friends all over Ireland to Back Our Bloomfield Heroes.

We appreciate that many of you are already coping with job losses and other personal and financial difficulties so our appeal is to those who can help to please donate to our own Quaker charity.

Donations can be made on line by clicking on the following link
https://www.bloomfield.ie/support-us/donate/ 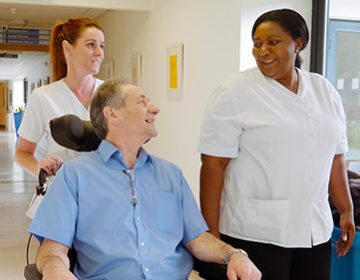 On Monday 6th April, Rathfarnham Friend, Ciara Harrison, presented a 5 minute spiritual message on behalf of Quakers in Ireland on RTE News Now.  This message can be viewed on the RTE Player for the next 30 days on this link. You can also read the words by downloading this Word document.

During the current Covid-19 pandemic, Quaker House Dublin is closed to Friends and visitors.  Please see the following information on how best to maintain contact with the office during this time.

The Historical Library is now open however visitors must make appointment prior to visiting.  Please contact library@quakers.ie to arrange your visit.

Valerie is also contactable on the mobile

We thank you for your continued patience and understanding during these difficult times.  May you all stay safe and well.