The Religious Society of Friends was represented at the event by Rachel M Bewley-Bateman, Dublin Monthly Meeting Clerk and Member of Churchtown Meeting. 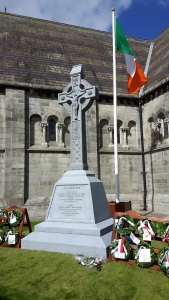 President Michael D. Higgins spoke eloquently about the tragic events in Ireland in the 1840s and unveiled a new Celtic cross in memory of those who died at that time.  It is situated just to the right of the chapel.

22,000 of the one million famine victims are recorded as being buried in Glasnevin.

Rachel M Bewley-Bateman’s great, great uncle Joseph Bewley (who died in 1851) was Joint Secretary of the Friends Famine Relief Committee along with Jonothan Pim, who later became an MP.

Rachel wrote the following prayer, which she shared at the commemoration:

As we remember all those who suffered, died, or were forced to emigrate during the Great Irish Famine of the 1840s  –

Let us remember also those around the world today who are without adequate food, water and shelter, for whatever reason.

Let us consider some of the possible causes of such disasters – dependence on a single crop, poverty and neglect, inequitable land and water distribution, selfishness and greed, abuse of power, climate change, inadequate care for our fellow human beings and our planet.

Let us also give thanks for those who have given and continue to give their lives in the service of others.

May we be given the vision, strength and generosity of spirit to help, in whatever way we can, to alleviate current and future suffering.